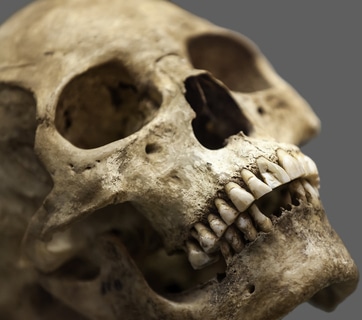 Researchers say they have discovered the world’s oldest dental implant, an iron pin that was found among the poorly preserved remains of a woman who died about 2300 years ago in Iron Age France. They don’t know if the implant was used during life or not, but it seems to have been placed as a cosmetic dentistry procedure, as the woman otherwise had a perfect set of teeth.

“A Refined and Ostentatious Elite”

According to researchers, the dental implant was discovered in the tomb of what must have been a very wealthy class of people. The chamber, located near Le Chene, southeast of Paris, was full of all kinds of jewelry, including torcs, anklets, and bracelets made of bronze, coral and amber necklaces, and brooches and belt ornaments. There was also an iron currency bar. The chamber was elaborately carved, but it collapsed when supporting timbers gave way, which crushed the skeletons and hastened their decay.

As a result of the poor state of decay of the skeleton, it was not immediately apparent that the small iron bar was a dental implant. Researchers took pictures of the site, then collected the teeth, which were all loose from the crushed skull, and took them to the lab for study. It was only then that researchers realized the woman had a set of 31 teeth and the metal post. Pictures taken at the site show the post sitting in the position of a missing tooth.

This makes her about average for the period, depending on her age. Other Iron Age burials suggest that about 5% of teeth were lost before age 35 (about one or two teeth lost), and a woman over age 35 may be expected to lose about half her teeth.

How Did the Restoration Work?

We don’t know for sure whether the restoration was placed during life. They think it may have been a cosmetic placement after death, because otherwise the pin would have had to be nailed up into the jaw (although it’s possible they could have used a hand drill like the Maya). This would have been very painful. The iron would also have had potential for negative reactions with the jaw–iron is not a biocompatible material like the titanium that we use for implants today. It’s even been suggested that this may have been the cause of death.

It’s also not known what type of dental crown was placed atop the restoration. It could have been either wood or ivory, both of which might have decayed before discovery. It’s also possible that it wasn’t topped with an aesthetic crown at all.

This fascinating discovery shows that people have long been obsessed with the appearance of their teeth and have tried to replace teeth lost to decay or trauma. Full findings are published in the journal Antiquity.